David Sedaris never fails to delight me with is point of view. I can read him again and again and laugh just as much as the first time. I was delighted to come across this passage this morning, and thought I would share it here for you, too.
Enjoy, and if you don’t already have it, buy his book, Me Talk Pretty One Day, here. 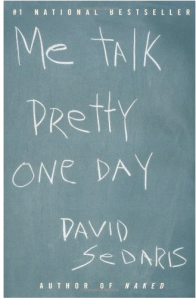 And what does one do on the fourteenth of July? Does one celebrate Bastille Day?”It was my second month of French class, and the teacher was leading us in an exercise designed to promote the use of one, our latest personal pronoun.

“Might one sing on Bastille Day?” she asked. “Might one dance in the streets? Somebody give me an answer.”

Printed in our textbooks was a list of major holidays accompanied by a scattered arrangement of photographs depicting French people in the act of celebration. The object of the lesson was to match the holiday with the corresponding picture. It was simple enough but seemed an exercise better suited to the use of the pronoun they. I didn’t know about the rest of the class but when Bastille Day eventually rolled around, I planned to stay home and clean my oven.

Normally, when working from the book, it was my habit to tune out my fellow students and scout ahead, concentrating on the question I’d calculated might fall to me, but this afternoon we were veering from the usual format. Questions were answered on a volunteer basis, and I was able to sit back and relax, confident that the same few students would do most of the talking. Today’s discussion was dominated by an Italian nanny, two chatty Poles, and a pouty, plump Moroccan woman who had grown up speaking French and had enrolled in the class hoping to improve her spelling. She’d covered these lessons back in the third grade and took every opportunity to demonstrate her superiority. A question would be asked, and she’d race to give the answer, behaving as though this were a game show and, if quick enough, she might go home with a tropical vacation or a side-by-side refrigerator/freezer. A transfer student, by the end of the first day she’d raised her hand so many times that her shoulder had given out. Now she just leaned back and shouted out the answers, her bronzed arms folded across her chest like some great grammar genie.

We’d finished discussing Bastille Day, and the teacher had moved on to Easter, which was represented in our textbooks by a black-and-white photograph of a chocolate bell lying upon a bed of palm fronds.

“And what does one do on Easter? Would anyone like to tell us?”

It was, for me, another of those holidays I’d just as soon avoid. As a rule, my family had always ignored the Easter celebration by our non-Orthodox friends and neighbors. While the others feasted on their cholocate figurines, my brother, sisters, and I had endured epic fasts, folding our bony fingers in prayer and begging for an end to the monotony that was the Holy Trinity Church. As Greeks, we had our own Easter, which was usually observed anywhere from two to four weeks after what was known in our circle as “the American version.” The reason has to do with the moon or the Orthodox calendar — something mysterious like that — though our mother always suspected it was scheduled at a later date so that the Greeks could buy their marshmellow chicks and plastic grass at drastically reduced sale prices. “The cheap sons of bitches,” she’d say. “If they had their way, we’d be celebrating Christmas in the middle of goddamn February.”

Because our mother was raised a Protestant, our Easters were a hybrid of the Greek and the American traditions. We recieved baskets of candy until we grew older and the Easter Bunny branched out. Those who smoked would awaken to find a carton of cigarettes and an assortment of disposable lighters, while the others would receive an equivalent, each according to his or her vice. In the evening we had the traditional Greek meal followed by a game in which we would toast one another with blood-colored eggs. The symbolism escapes me, but the holder of the table’s one uncracked egg was supposedly rewarded with a year of good luck. I won only once. It was the year my mother died, my apartment got broken into, and I was taken to th emergency room suffering from what the attending physician diagnosed as “house-wife’s knee.”

The Italian nanny was attempting to answer the teacher’s latest question when the Moroccan student interrupted, shouting, “Excuse me, but what’s an Easter?”

It would seem that despite having grown up in a Muslim country, she would have heard it mentioned once or twice, but no. “I mean it,” she said. “I have no idea what you people are talking about.”

The teacher called on the rest of us to explain.

The Poles led the charge to the best of their ability. “It is,” said one, “a party for the little boy of God who call his self Jesus…oh shit.” She faltered and her fellow country-man came to her aid.

“He call his self Jesus and then he be die one day on two…morsels of…lumber.”

The rest of the class jumped in, offering bits of information that would have given the pope an aneurysm.

“He die one day and then he go above of my head to live with your father.”

“He weared of himself the long hair and after he die, the first day he come back here for to say hello to the peoples.”

“He make the good things, and on the Easter we be sad because somebody makes him dead today.”

Part of the problem had to do with vocabulary. Simple nouns such as cross and resurrection were beyond our grasp, let alone such a complicated refexive phrases as “to give of yourself your only begotten son.” Faced with the challenge of explaining the cornerstone of Christianity, we did what any self-respecting group of people might do. We talked about food instead.

“Easter is a party for to eat of the lamb,” the Italian nanny explained. “One too may eat of the chocolate.”

“And who brings the chocolate?” the teacher asked.

I knew the word, so I raised my hand, saying, “The rabbit of Easter. He bring of the chocolate.”

“A rabbit?” The teacher, assuming I’d used the wrong word, positioned her index fingers on top of her head, wriggling them as though they were ears. “You mean one of these? A rabbit rabbit?”

“Well, sure,” I said. “He come in the night when one sleep on bed. Which a hand he have a basket and foods.”

The teacher sighed and shook her head. As far as she was concerned, I had just explained everything wrong with my country. “No, no,” she said. “Here in France the chocolate is brought by a a big bell that flies in from Rome.”

I called for a time-out. “But how do the bell know where you live?”

It was a decent point, but at least a rabbit has eyes. That’s a start. Rabbits move from place to place, while most bells can only go back and forth — and they can’t even do that on their own power. On top of that, the Easter Bunny has character. He’s someone you’d like to meet and shake hands with. A bell has all the personality of a cast-iron skillet. It’s like saying that come Christmas, a magic dustpan flies in from the North Pole, led by eight flying cinder blocks. Who wants to stay up all night so they can see a bell? And why fly one in from Rome when they’ve got more bells than they know what do to with here in Paris? That’s the most implausible aspect of the whole story, as there’s no way the bells of France would allow a foreign worker to fly in and take their jobs. That Roman bell would be lucky to get work cleaning up after a French bell’s dog — and even then he’d need papers. It just didn’t add up.

Nothing we said was of any help to the Moroccan student. A dead man with long hair supposedly living with her father, a leg of lamb served with palm fronds and chocolate; equally confused and disgusted, she shrugged her massive shoulders and turned her attention to the comic book she kept hidden beneath her binder.

I wondered then if, without the language barrier, my classmates and I could have done a better job making sense of Christianity, an idea that sounds pretty far-fetched to begin with.

In communicating any religious belief, the operative word is faith, a concept illustrated by our very presence in that classroom. Why bother struggling with the grammar lessons of a six-year-old if each of us didn’t believe that, against all reason, we might eventually improve? If I could hope to one day carry on a fluent conversation, it was a relatively short leap to believing that a rabbit might visit my home in the middle of the night, leaving behind a handful of chocolate kisses and a carton of menthol cigarettes. So why stop there? If I could believe in myself, why not give other improbabilties the benefit of the doubt? I told myself that despite her past behavior, my teacher was a kind and loving person who had only my best interests at heart. I accepted the idea that an omniscient God had cast me in his own image and that he watched over me and guided me from one place to the next. The Virgin Birth, the Ressurrection, and countless miracles — my heart expanded to encompass all the wonders and possibilities of the universe.

A bell, though — that’s fucked up.